In July, I had the privilege of being a participant in the Etchings Festival, which took place in Southern France, in the beautiful village of Auvillar. Of course, I ended up adding two weeks of travel time on to explore other new places in France and Spain.

I flew into Paris, spent one night, and then took the overnight train to Barcelona, Spain, which was a completely new city for me (overnight train travel on the cheapest seat possible – not recommended (but actually, I’ve got another overnight train trip coming up, maybe I’ll never learn)). I went to all the architectural sites and museums that I could possibly fit into four days, then it was time to hit the tracks again… Back to France, to the Pyrenees.

In the Pyrenees, I stayed in a great little town called Cauterets, which was the base for my mountain explorations. I hiked. About 25 miles in three days (but who’s counting, I survived, my feet survived, no ours or chiens des montagnes were encountered) on the GR-10 and other trails around the vicinity of the Parc National des Pyrenees. It was amazing, and honestly, I didn’t really want to leave. It was also incredibly inspiring, and my forthcoming set of guitar and viola pieces will be inspired by some of my hikes (and Miro).

Okay, so the Etchings festival itself was pretty incredible. I met a lot of fabulous people, and the performers were excellent. My latest acoustic piece, Luminous Flux, for alto sax, bassoon, violin, viola, and cello was rehearsed and then premiered by members of the East Coast Chamber Ensemble at this 13th century chapel in the town of Auvillar, France. The guest composers were Fabien Levy and Louis Karchin, who both had some extremely refreshing insight into my music.

The participant composers were great, too. We had a lot of adventures (some countryside hikes), drank a lot of wine, and ate a lot of cheese. 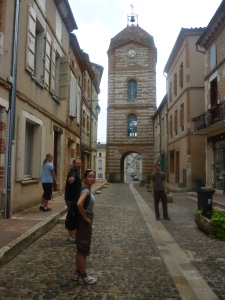 Kari Besharse is a composer of both electroacoustic and acoustic music. She is interested in finding new ways to combine and share ideas and materials between the two mediums through a cross-fertilization of processes and ideas. Inspired by the sounds and processes inherent in the natural world, timbre, texture, and sound are essential players in her works, which are often generated from a group of sonic objects or material archetypes that undergo processes of rupture, degradation, alternation, and expansion.

One thought on “Etchings Festival & Adventures in France and Spain”