For the past couple of months I have had my head completely underground composing a work for the MIZZOU New Music Summer Festival coming up July 10-17. This piece was written for Alarm Will Sound, one of the top American new music ensembles directed by Alan Pierson. This year, the festival will feature the music of guest composers Roger Reynolds and Anna Clyne. There is an interesting lineup of daily masterclasses, presentations and concerts. Although resident composers were not able to include electronics in their works, I am psyched to see that many of the other concerts will include electroacoustic works and pieces for instruments and electronics. I am really looking forward to this festival!

The piece that I wrote for Alarm Will Sound is titled Rails, which was inspired by the soundscape of Hammond, Louisiana (my current home). Here is the program note:

Rails (2011) was inspired by the soundscape of Hammond, Louisiana. More specifically, it engages the sounds that I have heard on a daily basis since moving from Champaign, Illinois, to Hammond, Louisiana in August 2010. My apartment is two blocks away from two intersecting railroad tracks. One is the Illinois Central line, which runs from Chicago to New Orleans, the other is a freight track. Intermittently all day (and all night) I hear trains approaching and passing from different directions. These trains are too loud to simply ignore, and often it feels like there is a low-level earthquake shaking the apartment. The conductors of these trains tend to lay on the horn as they are passing through town, creating a long and varied sound as the train whistles are warped by their own mechanism, the atmosphere, and by speed and distance. Additionally, each of these trains has its own unique rhythmic profile, its own pattern of creaks, clicks and knocks, and its own speed. Each time a train passes; a unique sonic experience is created. Therefore, the sounds of these trains are very much a part of my piece, the spectra of their whistles, the rush of sound when they pass by, and their creaky mechanical rhythms. My apartment also looks out over a park, so my piece is also populated by pastoral sounds such as birds and wind chimes. 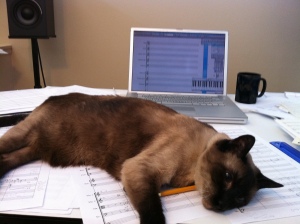 Jasmine assisting with the composition of "Rails" (and no, I didn't stab her in the throat with the pencil)

With my piece finished, it’s time to satiate some of my wanderlust.  Phil and I will be taking off in a couple of days for a 2-week camping adventure in Colorado or Appalachia. In July, after the MIZZOU New Music Summer Festival, I am also looking forward to ICMC in Huddersfield, England.